The renovated Early Christian Mausoleum can be visited again

The Cella Septichora Visitor Center is closed from 6 June 2022 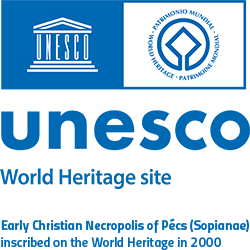 part of the UNESCO world heritage

Sopianae, predecessor of Pécs in the Roman times had its late Roman Paleochristian cemetery included in the UNESCO World Heritage list in the year 2000. In their architecture and wall-paintings the excavated finds present the Early Christian burial architecture and art of the Northern and Western provinces of the Roman Empire. From among the Hungarian world heritage sites the Early Christian cemetery is the only one that has won itself a place on the UNESCO world heritage list in the category of culture-historical architecture.